Americans overwhelmingly support legalizing cannabis — polls remind us of this trend frequently. But it turns out the country is deeply divided about how, exactly, to do it, according to a new survey conducted this spring by PSB Research, Civilized, Burson Cohn & Wolfe, and BuzzFeed News.

One of the most detailed surveys of its kind found 84% percent of Americans favor legalization for medical or recreational purposes, but less than half support bills currently in Congress to change federal cannabis law concerning recreational use, including bills supported by Democratic presidential candidates. But Americans widely embrace measures to tax and regulate it (60%), which is only possible at the state level.

Americans are okay electing a pro-legalization president, with fewer than a quarter saying it would undermine their support. Similarly, a whopping four-fifths of the country supports or is okay with a presidential candidate who admits to having used marijuana.

Twenty-seven percent of American adults say they currently use marijuana and tend to consume it several times a week.

But many Americans say they don’t want to get too close to the drug — half would be uncomfortable at a gathering where others are consuming cannabis, three-quarters don’t want colleagues showing up to work stoned, and half wouldn’t be in a romantic relationship with a cannabis user.

Defying stereotypes of lazy stoners, however, current cannabis users are 13% more likely to be employed full time and are generally younger than nonusers. Users are also more likely to be raising kids at home, and users report they tend to use it, not surprisingly, to relieve stress.

Despite notions of potheads as lefty peaceniks, their ideologies hew closely to the country at large. Thirty-seven percent voted for President Donald Trump in 2016, with 40% going for Hillary Clinton; 7% went with another candidate.

How and Why to Legalize Cannabis

The most popular proposal for recreational cannabis is taxing and regulating the drug like alcohol, allowing adults to use and possess it — with 60% of Americans expressing support and just 20% opposing it. This proposal is also the only measure in the survey supported by a majority of nonusers (54%). But while popular, laws like these cannot be enacted at the national level because, like with alcohol, states retain regulatory and taxation authority. 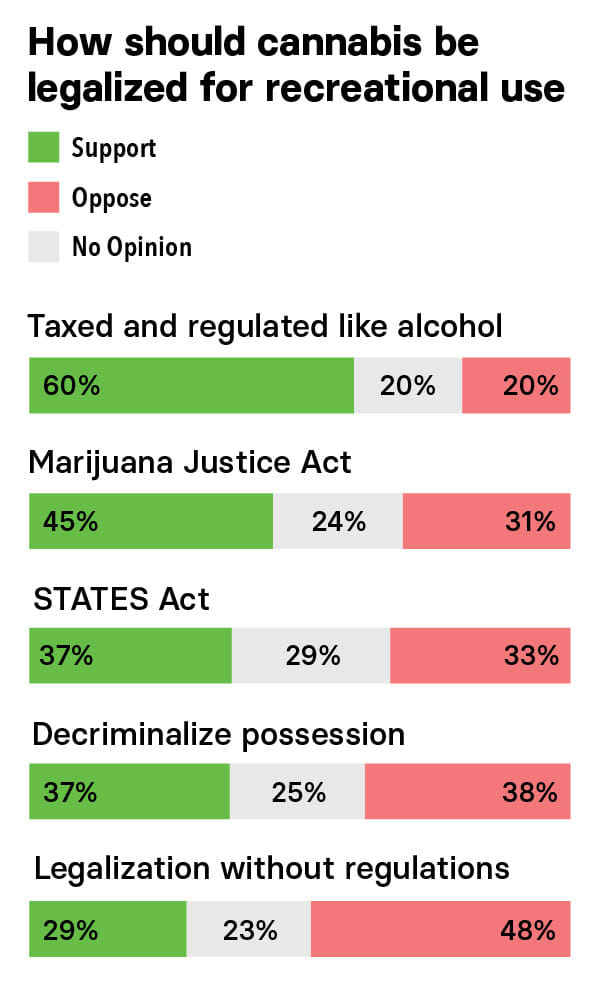 The STATES Act, sponsored by Sen. Elizabeth Warren of Massachusetts, would prevent federal officials from arresting people who comply with state legalization laws, but keep cannabis illegal at the national level. While Attorney General Bill Barr this month said he too supports a law like that, only 37% of Americans are onboard. Even among consumers, just 51% thought this was a good idea.

Slightly more popular: a proposal called the Marijuana Justice Act, proposed by Sen. Cory Booker of New Jersey. It would legalize cannabis on the national level and punish states that keep it illegal, while getting rid of federal criminal records for past cannabis convictions. It won 45% of support, with 74% of users but just 34% of nonusers onboard.

Some vague proposals also faltered. The concept of decriminalizing cannabis use — that is, eliminating penalties for possession while continuing to ban sales and cultivation — came up with just 37% support. Even less popular was the notion of eliminating all penalties for cannabis without any framework to regulate the drug’s market; just 29% of Americans like that idea, even though 56% of users think it’s okay.

Some arguments are far more persuasive than others. The leading case for recreational legalization is that it helps people who need it as medicine — 72% found that to be a strong argument. After that, Americans are persuaded that legalization will bolster the economy (46%), could save police resources (39%), and be safer than alcohol (39%).

The strongest argument against legalization was that more people would drive under the influence (47%) and that more underage people will use it (40%). One-third are moved by the so-called “gateway” argument that weed leads to harder drugs.

And legalizing harder drugs is roundly unpopular. Eighty-seven percent oppose legalizing substances like methamphetamine, while just 7% want to legalize them (the remaining 6% were unsure). Support was slightly higher among cannabis users: 14% want to legalize hard drugs, but they’re outranked by the 78% of users who want to keep them illegal. 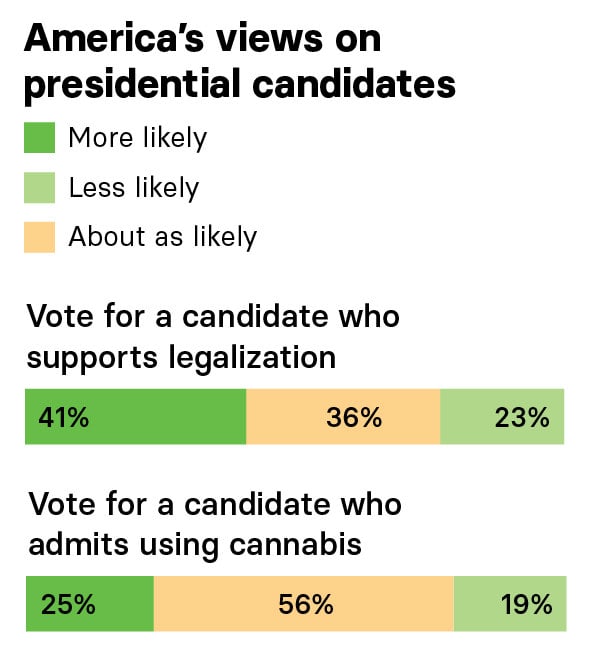 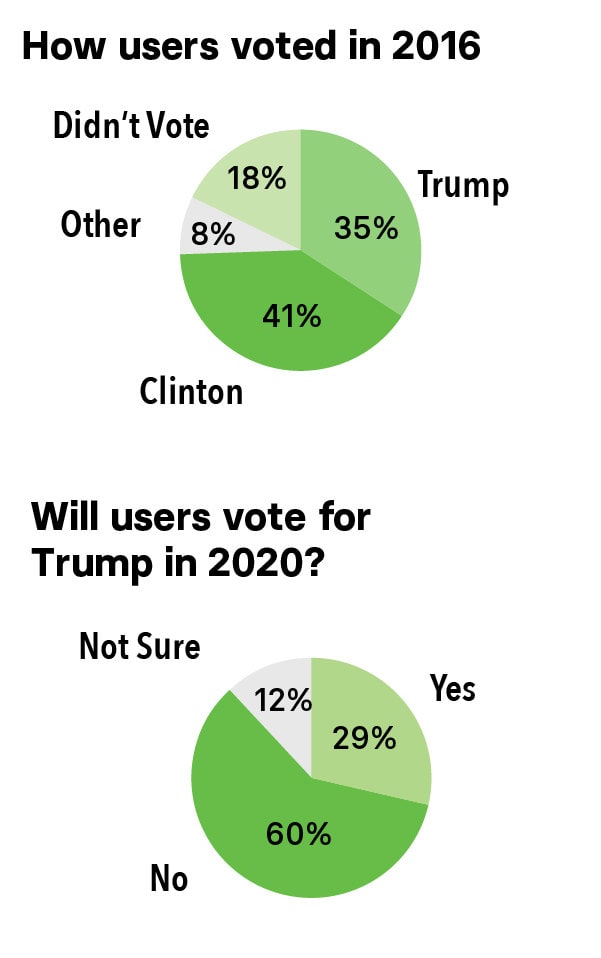 Americans tend to want their next president to support legalization, with 41% saying it will make them more likely to get their vote; just 23% say it makes them less likely. Thirty-six percent don’t care. Americans are amenable to a president who has smoked pot — with 56% saying it makes no difference to them. A quarter say they’re actually more likely to vote for a president who’s admitted using, compared to 19% who would be less likely. 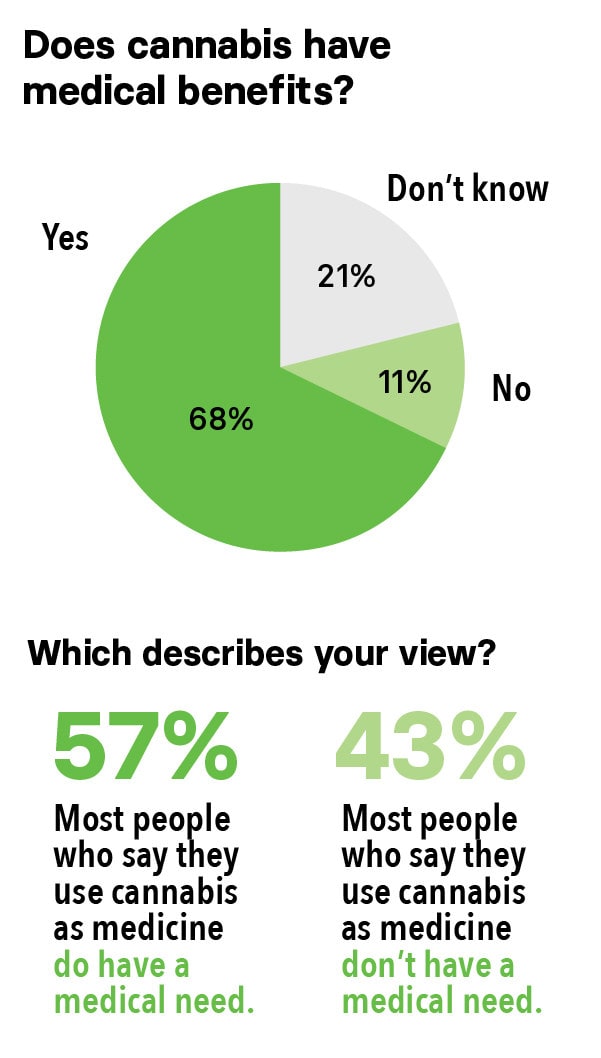 Americans believe cannabis has medical properties by a 6-to-1 margin, but they’re split about the veracity of claims from medical marijuana patients. Forty-three percent don’t believe that people who say they use cannabis as medicine have an actual medical need, while 57% think they do have a legit need.

In the 10 states where cannabis is legal for recreational purposes, not everyone knows it’s the law; a quarter of those people believed it was still illegal in their state, possibly because they think it’s only allowed for medical purposes.

Although Americans agree in a 66% landslide that cannabis is a drug, users tend to be holdouts. Fifty-six percent of users said it’s not a drug and only 37% of users agreed that it is. (Canadian users, who were also asked certain survey questions, tend not to hold this belief: Those users said by a 58% to 35% margin that it’s a drug. Canada legalized recreational weed nationwide last fall.)

Thirty-five percent of Americans say they’ve tried cannabis at some point, and of those who haven’t, 25% say they’d consider it. 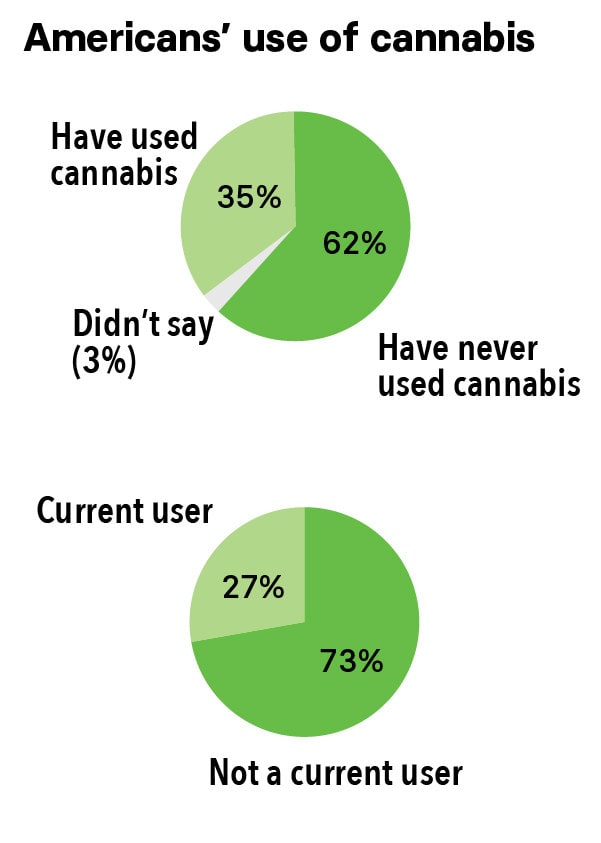 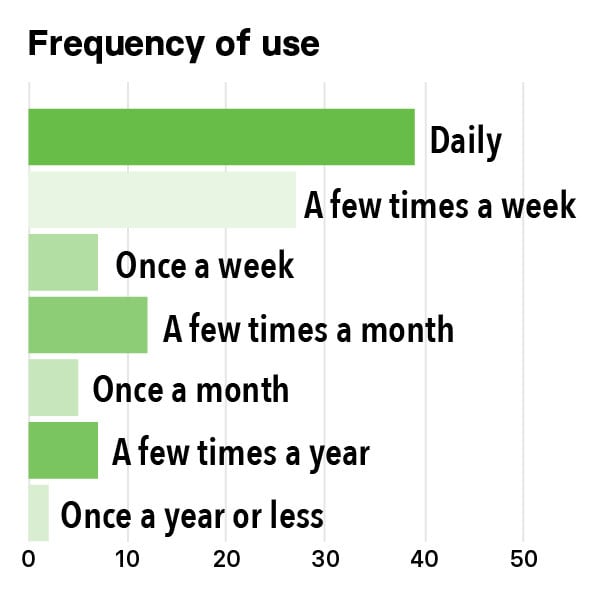 Just over a quarter of Americans say they’re users currently. Of those, nearly two-thirds report using marijuana daily (39%) or a few times a week (27%). Of cannabis consumers, most — 59% — tried it for the first time between the ages of 13 and 18 years old. As a nation, joints are the most popular vehicle to use (48%), followed by pipes (26%). 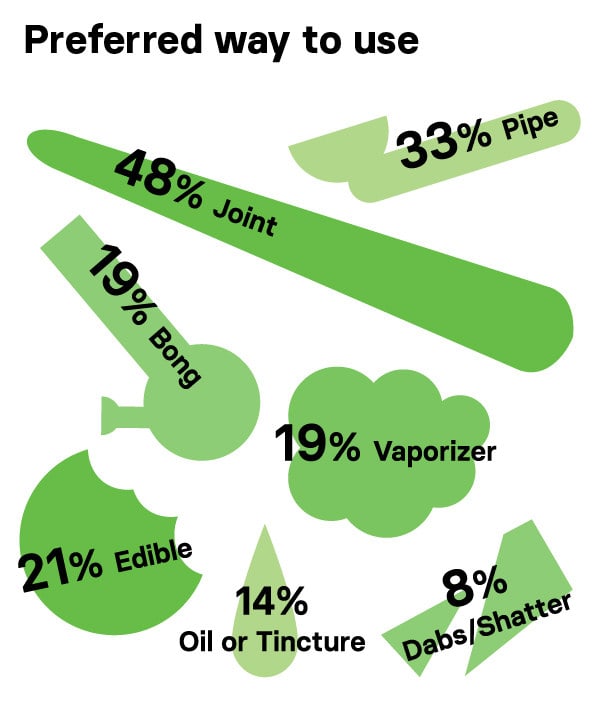 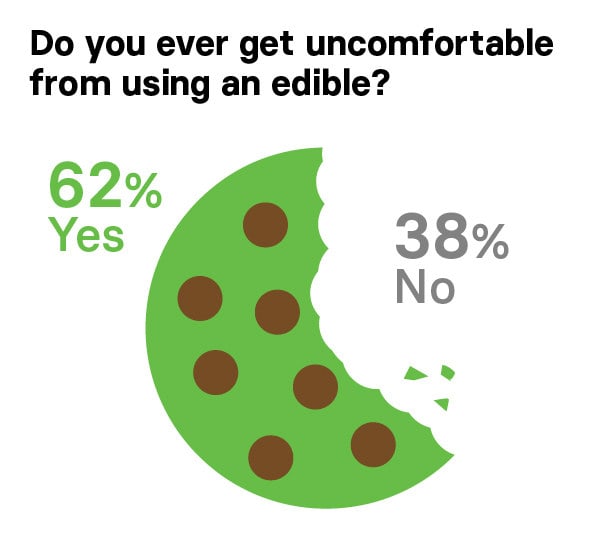 But the way users consume cannabis differs in the 10 states that have legalized recreational cannabis, where pipes are slightly more popular than joints. Edible cannabis is also 50% more popular in states with legalization, likely because those products are sold over the counter.

Although cannabis users are often portrayed as burnouts, they are more likely to be employed full time than nonusers — 47% to 34% — and are 20% more likely to have kids in their home, possibly because they tend to be younger. Education levels are roughly even among those who use and those who don’t — having graduated high school, college, and achieved advanced degrees at nearly identical rates.